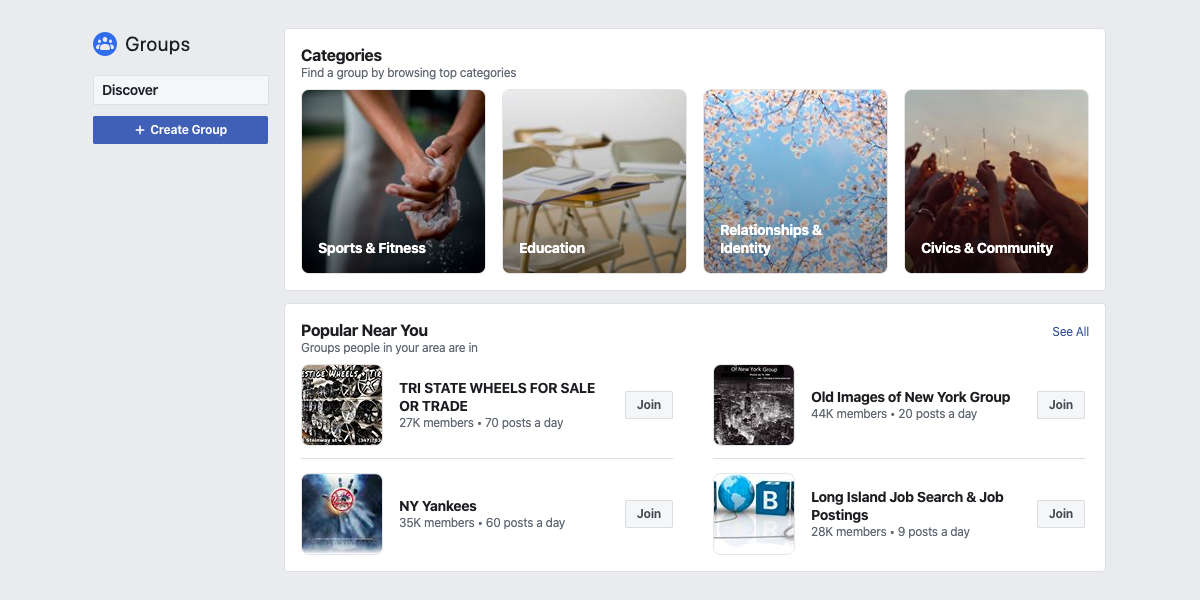 Leading up to 2020, Facebook began pushing “Groups” as a platform in an attempt to have users engage with the social media giant on a deeper level. The reason? If users begin to be more actively involved in Groups, their time on the platform increases thus does Facebook’s advertising revenue. To prove the latter point, the push for Groups coincided with testing of group-specific ad placements, aptly referred to as the Facebook Groups Feed placement.

Little did Facebook know at the time, their Groups platform is now needed more than ever with the spread of COVID-19. Facebook Groups is playing an important part in connecting neighbors and peers, allowing users to quickly share and engage with the latest hyper-local news and content.

With all this in mind, Facebook Groups is an important tool for both you as a marketer and a person navigating these uncertain times. Here’s everything we currently know about the Facebook Groups Feed placement, and tips for finding Facebook Groups that are useful for your personal and professional lives.

Keep Up With Evolving Best Practices

Subscribe to our blog and receive articles directly to your inbox.

Part of the platform since Facebook’s inception, Groups was designed to connect users through a mutual interest or hobby without a formal “friend request.” Between then and now, over 200 million groups have been created.

The Groups tab has historically taken a back seat to other Facebook endeavors like Instagram or Stories. However, that seems to have changed. In Mark Zuckerberg’s 2019 F8 keynote address, he stated that “Groups are at the heart of the [user] experience,” hinting at a renewed focus through an aesthetic update as well as more prominent placement on a user’s dashboard.

Shortly after, Facebook began their initial round of testing of Groups-specific ad placements, and even purchased air-time during the Super Bowl to push more users to join and engage with Groups. Clearly, Facebook is positioning Groups as the next frontier for both user engagement and their advertising business.

When Will the Facebook Groups Feed Ad Placement Be Available?

According to Facebook’s documentation, the ad placement is still in the testing phase. Normally Facebook takes a six-to-nine month research and development cycle for the release of new ad features, but with CV-19, we can reasonably assume it will be made available in the coming weeks.

According to Facebook’s documentation, these ads will be featured “alongside community posts in the mobile feed in the Facebook Groups tab,” similar to ads in the standard mobile news feed. This said, it’s reasonable to assume they’ll look identical to the high-performing mobile news feed ads we all know and love.

What Ad Types Can I Run in the Groups Feed Placement?

According to Facebook’s documentation, at the initial launch it sounds like only static image ads will be allowed. As Groups has been ad-free for its entire existence, Facebook is easing the launch by starting with the least distracting, most organic ad type they have in their portfolio.

Tips For Finding Groups That Are Important To Your Personal Life

Whether you have a specific hobby or are a fanatic of a particular sports team, there is definitely a Group out there for you. However, the most useful Groups are localized to your area. Many hobby groups have sub-groups specified to a location, and many towns have dedicated pages themselves.

Start by navigating to the Groups tab on your Facebook page and click the “Discover” link. Search your town and state (“Pearl River, NY”) and your county and state (“Rockland County, NY”). I bet you’ll see a huge list of local groups. To find the most active groups, look for a high “posts per day” metric, located just below the group description.

In a time like this where receiving fast, localized information is of utmost importance, I suggest joining your town’s Facebook Group, your County’s Facebook group, and seeing if your school district’s PTA has a group.

Whether you are looking for professional connections, advice, or pure entertainment, here are some of our favorite Facebook Groups.

Sunny Lenarduzzi is a YouTube expert, launching and growing hundreds of super-successful client channels. Her private group has tons of resources for those looking to expand their digital video presence.

Over 30,000 social media decision-makers in one place gives you the opportunity to see how others are growing their pages and advertising budgets.

A group created to help facilitate ideas and advice for parents or caregivers at home with little ones during this unique time.

Facebook Groups can provide value not only for your future marketing plans, but for your everyday life. We’ll keep you updated as more news breaks regarding the Group Feed Placement. In the meantime, click this link and begin connecting with local Groups in your area.

Gifting is a State of Mind